By Brent Suarez
0
0
Share:
The company’s expertise also includes the retail sale of performance parts, offering fully legal approvals and warranty. Finally, educational goals have also been one of Hennessey’s goals since 2008 when they opened a Certified Tuner School for the education and training of high performance vehicle technicians.

The Exorcist Camaro ZL1 saw the light of day a few years ago. In 2017, the hands of the specialists at Hennessey created a powerful statement against the Dodge Challenger SRT Demon, which at the time caused a sensation in the performance car world with its presence. The Camaro Hennessey 30th Anniversary sets itself apart from the original 2017 Exorcist, representing a bespoke model that celebrates the brand’s 30 years in building some of the most impressive automobiles in the industry.

Of course, Hennessey Performance Engineering couldn’t celebrate its lifelong business other than producing a beast capable of taking down any other vehicle on the street with its four-figure horsepower figures. In other words, this impressive machine comes equipped with a supercharged 6.2-liter V8 taken from the Corvette ZO6, but heavily reworked to deliver 1,000 hp and jaw-dropping torque; 883 lb-ft (1,196 Nm) to be exact, directly slaughtering the rear wheels. These numbers translate to a time of 2.1 seconds from zero to 62 mph (100 km / h) and a top speed of 217 mph (350 km / h).

Mechanically, the vehicle includes many powertrain upgrades such as a high-flow supercharging and air intake system, custom camshaft configuration, orifice heads, stainless steel manifolds and some high throughput catalysts. In addition, the 30th Anniversary Exorcist Camaro can be ordered either with a manual transmission with RPM matching technology, specially designed for those seeking the purest experience possible, or with a 10-speed automatic option, tuned to do so. in the face of such monster power figures.

Similar to the other Exorcist Camaro ZL1, the 30th Anniversary model still features the same slick suspension setup with Multimatic’s racing DSSV shocks that benefit from a spool valve mechanism. Firstly, they reduce the weight of every corner of the vehicle but, more importantly, they also feature a very ingenious camber adjustment mechanism, allowing the car to shift from road settings to a track-oriented setup. ‘to an additional 1.5 degrees of negative camber. in just a few minutes.

The exterior appearance of this machine is remarkable, exuding an aura of power and charm, but also sheer dread, especially in such a striking paint job. The uniqueness of this build is captured with the help of special anniversary logos installed on the front and behind each front wheel. Additionally, each example will receive an individually numbered Anniversary Edition chassis plate with its build number. The widebody kit follows a similar aerodynamic pattern to the other Exorcist models in the range, featuring an enlarged grille and splitter for better engine airflow and a massive spoiler capable of generating 136kg of gas. support at 150 mph.

Unfortunately, given that this is a limited edition, Hennessey will only be producing 30 copies of the Exorcist Camaro as an anniversary edition. Pricing starts at $ 135,000, including the donor’s vehicle and a two-year full build warranty. The vehicle can be ordered as a coupe or convertible.

John Hennessey very proudly acknowledges that “the Exorcist is the epitome of the American muscle car and has the offline performance to embarrass almost any car on the planet.” He dubbed the 30th Anniversary Edition’s Camaro Exorcist as “a fierce supercar killer”, and it shows. From menacing looks to incredible on-road performance, this exclusive design encapsulates the brand’s DNA in the purest form possible. Their celebration project was a resounding success, and we certainly believe it will be an inspiration for many more unique creations in the future. 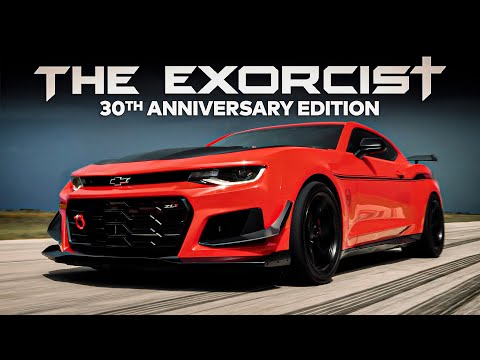