Automakers are making continuous efforts to promote their new electric vehicles as “Exciting automobiles” for the future. Of course, some facts support this idea, but some facts contradict it. Ultimately, your personal experience with these cars will influence your take on them. Even so, at the end of the decade your opinion might not even matter, as the whole industry moves towards electrification.

So it’s fun to see a new electric car take on a traditional car. ICE-powered. And today, the Chevrolet Corvette C8 is dragging the Ford Mustang Mach-E GT. It’s not the kind of game you usually expect, but today it’s an option for anyone looking to buy an exciting new car. At first glance, you wouldn’t think the Mach-E GT will stand a chance in this battle.

But before making any predictions, it might be best to just look at the specs. The Mach-E runs on a dual electric motor setup, which means it has a maximum output of 480 horsepower and 634 lb-ft (859 Nm) of torque. It has the advantage of AWD, but it also weighs 4,997 lbs (2,266 kg). As with all electric vehicles, the line exit will inevitably be quite quick, but today it will have to cover the entire quarter mile (402 meters) before a winner is decided.

If you remember the video of the Mach-E GT on the Autobahn in Germany then you know by the time the Mach-E hits 96 km / h it’s mostly downhill from there . The Corvette C8 is powered by a 6.2-liter V8, which develops 495 horsepower and 470 lb-ft (637 Nm) of torque. This is also a RWD vehicle, but the mid-engine layout should provide it with excellent grip out of the line. Not to mention the fact that he weighs almost 1350 pounds (612 kg) less than his opponent.

But let’s see how the battle unfolds. As expected, it’s close. Both cars hit 60 mph in seconds, and they’re neck and neck. But that’s when the Corvette starts to take the lead. And there is nothing the Ford driver can do about it. They decide to start again for a second round, but it is unlikely that anything will change. Things got even worse for the Mach-E GT as the Corvette assumes the leadership earlier in the race.

The C8 crossed the finish line with a trap speed of 113 mph (181 km / h), while the Mach-E GT could only reach 100 mph (160 km / h). At this point, there is only one thing left to do: a roll race! The starting point is set at 30 mph (48 km / h), but the Ford driver takes a dirty trick on his opponent. Going at full throttle well before the C8, the Mach-E GT narrowly won this third round. Ultimately, if you need some extra seating, the Mach-E GT could be fine. Otherwise, stick with the Corvette for the next few years! 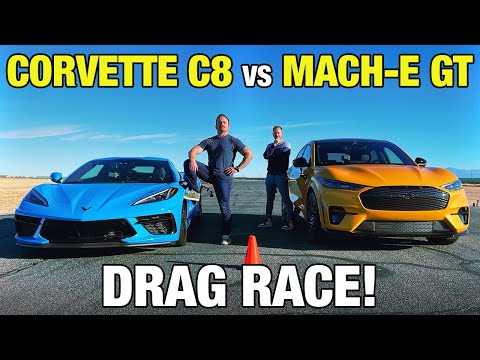 What automakers will reveal at the partially ...